“You did this to yourself!”

The words danced like they were proud of it in my head as my husband Adam was reminding me the same. Annoyed with the fact I had come home upset from yet another empty-handed spear hunt, he said you could kill deer in a several hundred yards rifle zone anytime you wanted, spreading his arms way out as if to remind me how far I could shoot. You decided that was too easy, so you picked up the bow, for an even smaller kill zone, arms in a smaller circle, closer to his body now. And when that got easy, you shrunk that zone again to the size of this, with his arms stretched out he turned in a circle to indicate his wing span was my throw zone, and he wasn’t far off. Can’t you see the handicap you have put on yourself? Do you have any idea what you are trying to accomplish? What you have already accomplished twice? You have to get an un-baited whitetail into a 6-foot circle.

My disappointment for the night vanished in an instant, satisfied with the reminder of why I wanted to spear hunt in the first place.

While the idea to spear hunt came after an arm surgery that left some doubt whether I would even be able to bow hunt again. I had been developing the skill set required for years, most of my life in truth. I began my whitetail career as a solo hunter and even after getting married I still hunted solo most of the time. As a farmer and rancher Adam did not have a lot of time to take me, but he always made sure I got to go. He would give me suggestions to any question I had and steer me certain directions, then off I’d go, chasing my elusive Mr. Big Horns.

Two years into bow hunting, my frustration was growing over not seeing many deer, and never any bucks. One successful hunt I made an amazing shot, one leg wrapped around the tree and the other precariously tip toed on the edge of the stand, with no safety harness. When Adam asked how I happened to drop the doe in her tracks behind my tree stand, I proudly told him. Heck, I even demonstrated, by holding my leg up like it was hooked around the tree, and I leaned way out like I was shooting my bow…he said well now you get to learn how to really hunt and he promptly took down all of my tree stands. I was mad for probably the next seven or eight years. He was not wrong,

I had made some really unsafe decisions and as long as I had been hunting,
I really didn’t know what I was doing. 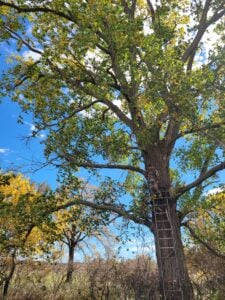 Bow hunting from the open ground will school you in a hurry, or it will take seven or eight years to start getting it right. At a snails pace I slowly became a hunter, a good hunter as Adam would often tell people. I would hunt every day I could the entire season, which in Nebraska is from September 1 through January 15 with the late antlerless doe season. I only hunt for monster bucks which are a rarity in my area, and I hoard my doe tags so I can hunt till the bitter end. Adam would often ask if I was even seeing anything, because I never came home with any deer till the last day or two. So, I started picking hair out of my unsuspecting prey that walked by or stumbled over me on the ground. He would just smile and shake his head. When I got my stands back to after a giant, I had a fork buck that began bedding under the stand I needed to use. Told to stay away when the fork was there and not bust the stand because it was not getting moved, I of course had to try. The next three sits, I sent Adam selfies with the fork buck sound asleep underneath me.

With the ability to be remarkably close to deer without being detected on the ground and deer regularly underneath while in the stand, when the idea of spear hunting came up it seemed like an absolute perfect fit. What was even better was I live in the one state where it is recognized as a legal weapon for deer. Game on!

I threw every day with a spear Adam had made me for months. I also researched spears, and if people really did hunt with them. I came across a knife company that made spears and called with numerous questions. I did not get many answers other than do not throw the spear into a slice of cottonwood. I had been using just that, my knife throwing target for practice. I was told I could hunt with the spear I had decided on, the Samburu light. Shorter by approximately 18” than the Samburu, so I figured easier for a girl with a handicapped arm to wield. Three years later when they discontinued the Samburu light, I was told it was never built to hunt with, only to “play” with. At that point I had killed two whitetails and would take a bear with it in the coming spring. Pretty lethal toy if you ask me.

I throw every day,

I could throw blindfolded and hit my mark if you stood me in front of my target, I know what throws are my strong favorites and which throws have my mental side working overtime. I practice that much. Just like a rifle or a bow, in the end, if I miss it is my error, not the bullet, arrow or the spear. I dialed my throw zone in, like a major league pitcher before I ever considered taking one to the field to hunt.

Once I did feel capable enough to hunt and decided to give it a go, I learned very quickly that I had only climbed half of the mountain that is spear hunting. I had thought I was a good hunter, but found out in a hurry, I was not anywhere near good enough to spear hunt. Those deer that are always right under you where it looks so easy…try standing up, moving to get in to position and then try and throw, and not get busted. I got schooled there more than I care to admit before I decided to brush my stands in to give me a little bit of cover from those wary little black eyes. I also learned to move differently. Bow hunting had not required much movement. Spear hunting is brutal with getting into the right throwing position. And speaking of throwing, you no longer get to take a step when you are throwing at a deer from a tree stand. It is just way too much movement and can create sound. This will change your throw dramatically. Throwing down at something is also not the same as straight across. My practice once again got a complete overhaul. No step and now throwing from the barn loft to get the angle. Then the next curve ball, why was I missing deer? I missed my first three throws and each time the doe simply side stepped the spear. All three hit exactly where I threw them, into the space the deer no longer occupied. Were they jumping the spear? Then I realized after having a conversation with Adam about it, that I could see their eyes. While none had been looking directly at me or even in my direction, I could see part of their eyeballs, and so they were seeing the movement of my throw and the spear headed toward them and they simply stepped away from what I assume they think is a falling branch because it never startles them. You read that correctly, they do not spook at all, and so comes the next learning point. Have your second spear unsheathed and within reach. Spear hunting is a marathon, not a sprint. If you frustrate easily, it is probably not for you. However, if you want to push your hunting to the next level, then I highly recommend it.

Spear hunting forced me out of my comfort zones on every level. It made me face challenges I had shied away from in the past and forced me to not only look them in the eye, but to conquer them.

Calling and decoy use were both things I was never good at, and I didn’t need to be because if I wanted a buck I didn’t try to bring him to me, I instead got on the stalk and went to him. So far, not possible with the spear, and so I must bring them to me. Want to know how to get good at calling or using decoys? You screw it up and blow deer until you get it right, period. You must be willing to take the risk you might get it wrong before you’ll learn how to get it right. I have brought giants in to 40, 27 and 18 yards, that all came a hellin as the term goes with their hair and attitude bristled like nothing I’d ever seen before. The adrenaline that coursed through my veins all three times, was well worth all the times I had screwed it up. And the fact that my success rate with calling now, far outweighs my failures, tells me that I will eventually get a giant to close into my throw zone. Until that day I get to enjoy the heart pounding show and learn from it. The skills and knowledge spear hunting has blessed me with, I honestly believe are unmatched with any other form of hunting.

I am a supporter of every legal weapon for hunting and would never shame anyone for the use of any of them. I will however leave you with something that will likely surprise you and you might also disagree with. But until you have tried it or seen it, you will have to trust me. I have hunted with almost every weapon known to man, and the spear is undoubtedly the most ethical and quick killing weapon I have ever used. My .243 sends bullets down range at close to 3000 feet per second, my bow 300, the spear maybe 12 feet per second. All three are capable of taking an animal, it comes down to the time the hunter has put in with each to develop the skills needed to be successful.

Recalls - Care for the Consumer

Getting Started in Archery