I am asked quite often, “how did you become such a good hunter?” My reply is without 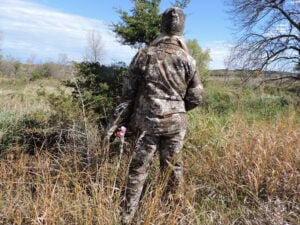 hesitation every time…I made a lot of mistakes. In fact, I probably invented a lot of new mistakes that most hunters never even thought of or tried. I repeated many mistakes more than once, you know, to make sure it really was not going to work.  “Persistence”

I am sometimes countered with, “well you were born in a hunting family, and had lots of opportunities.” True, but not a deer hunting family, which was my first solo venture. After begging my dad for years to let me deer hunt, he finally lined up a friend to take me, got me a permit and handed me his bull barrel .22-250. Opening morning we drove down a country road, through a pasture gate and sat in the pickup overlooking a canyon. This cannot be it I sat thinking. We did not see anything. The next day I decided to figure it out on my own. All I knew about deer at this point was they lived outside. I found another pasture, got permission and opened the gate. “Persistence” I tromped around in that pasture everyday of rifle season carrying that cannon on my shoulder and never saw a buck, for the buck only tag I had in my pocket. There is number beyond infinity I am sure, and it is the number of mistakes I made that year. 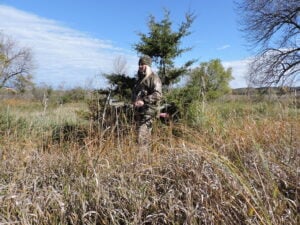 The following year I filled my second buck only tag, alone in the same pasture. I filled that tag not because I wasn’t afraid to make mistakes, but I was willing to learn from them. I was persistent, and if anyone ever told me I could not do it, I never let the sound past my ears and into my mind. I refused to believe anything other than, I will not fail if I never quit trying.  “Persistence”

Over the years I went from the rifle, to the bow and now the spear.

People assume I no longer make mistakes. An assumption of at your level, you have skills and experience, and we expect your A game every single time.  It is just not going to happen. The best hunters in the world make mistakes.

I hear so often from people wanting to get started in the world of hunting that they are scared to make a mistake. In this fast-paced, social media propelled world, for hunters and others alike, we are driven for instant success, and we are terrified to think it may not happen. So, let’s look at the word mistake a different way. In a similar word search for “mistake,” the words misunderstanding, and miscalculation pop up. Hmmm, not so scary after all.

Now I said earlier that an experienced hunter does not let their mistakes define them, and we do not. What makes us and shows the world who we are, are the lessons we learned, and the skills we developed from each mistake we made.

That is what defines us. “Persistence”

So, you want to know where to start…start anywhere but start! There is no “perfect” spot, no “beginner” species, and certainly no weapon, accessory, garment or spray that is going to make you a seasoned hunter overnight. But you are also never going to become a hunter period if you do not walk through whatever your pasture gate maybe and start. You can do this! “Persistence”

Spear Hunting - an Ethical Option in Some States