Recently my family and my best friend and I had the opportunity to adventure to  with the goal of harvesting an elk in our sites.  This trip turned out to be so much more than just a hunting trip.  I was actually apprehensive and nervous about going because we seemed to be so alone, I kept using the term “winging it” since we were doing a “do it yourself”(DIY) hunt on public land.  Just over halfway there from  my fears were strengthened as our truck broke down in .  My hubby, quick to diagnose the problem and realize he had the replacement part at home in Texas, sprung into action and got us safely into the neatest little RV park  while his dad drove the part up to get us back on the road. That next morning was a rough one as all 3 of our kids woke up throwing up and now, with Shaun’s dad, the 4 of us weren’t feeling much better….carbon monoxide poisoning from the propane refrigerator vent! Had we been able to get on up into the mountains we might have mistaken this for altitude sickness and cut our trip short! We were not really actually alone because God says He’ll never leave us or forsake us and as God would have it, the manager of the park was a certified diesel mechanic who looked over Shaun’s shoulder and provided the confirmation Shaun needed during the fix.  Only God does stuff like that! So the next day we were back on the road before lunch! I was soooo nervous! 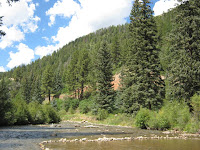 I don’t really know what my expectations were for how it should look there but as we got closer to  the beauty of  began to amaze me and I was itching to get out and explore. Just when I thought it couldn’t get any better we hit . The most beautiful little town with the Animas river winding and snaking all through it. It was about 7:00pm as we started winding up into the mountains just north of Delores towards our camp and as we came around the bend, mountain on the left side river on the right we were facing the largest mountain I’d ever personally seen who’s slope was covered in the most beautiful Aspen grove.  As the sun shone down piercing in spots through the low lying clouds that were clinging to the canopy of the  grove my breath caught in my chest and tears moistened my eyes.  I’m a military brat so I’ve been A LOT of places and I had never before seen landscape so beautiful that it made me want to cry. Reliving it as I’m writing now brings tears to my eyes.  We reached a flat pasture like area near the top of the mountain where it was time to get out and set up camp.  When I say pasture you think grass but no, this pasture was carpeted by the thickest most glorious squishy healthy fern! A sticker-less fern pasture as large as a football field! To my 3 children’s delight if you took a shovel to it every scoop of earth yielded the fattest healthiest fishing worms….or “I dare you to eat that worms”!  I digress!  We set up camp and cooked dinner that night and began to get butterflies about seeing elk and exploring the splendor of this new country we were calling home for a week. 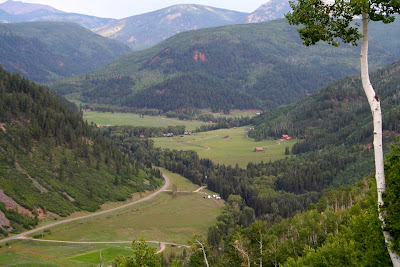 The next morning we awoke and dressed in our hunting gear, packs and bows, and safety orange kissed the kids goodbye and wished my bestie Shelly good luck with them and set out!  My hubby and I were in such awe as we began hiking I’m not sure if we even looked for elk for the first little bit of the hike. I seemed to be too busy catching flies with my mouth gaped open at all the newness and glory like I’d never seen before!  Part of that was a little breathlessness too but not too bad.  We started training as best we could back in April for this adventure we knew we were gong to embark on in Aug/ Sept so 23lbs lighter and in the best shape of my life I knew I could handle quite a bit. We didn’t see anything but a couple of coyotes and some turkey vultures that day but the next day, OH the next day! 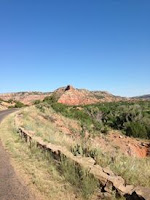 Noticing that the part of the mountain we were hunting had trails that were open to motorized vehicles we opted to go down our little mountain and over to the next one which had a trail winding up it that was not open for motorized transportation and we were walking so no worries there!  We figured less traffic and noise might mean more animals, we figured correctly!  Nearly to the top of this 5mile consistent incline trek I saw my very first grouse! Guess who happened to have a small game license and knew that grouse season had just opened! ME! After I’d harvested her my hubby just stood in amazement at my confidence.  He was shocked that I had taken the shot but incredibly glad for it!  Onward and upward though!  As we reached the top and broke over the ridge we descended into a large valley between the peaks of 3 mountains with a decent sized lake on one end teaming with ducks! My breath caught again…for both of the before mentioned reasons!  We hiked across and over onto the next mountain and stopped for breakfast just the two of us, him propped up against a tree eating a pop tart and me with my head laid on his leg in an Aspen grove at nearly 9000 ft elevation with the morning sun filtering through the leaves and painting yellow rays all the way to the ground.

We set out after our little breakfast break again and it was then just 100 yards later that we beheld the most amazing site and one we had come so far to see.  As we hiked partly up the ridge and around, just below us were 5 elk. A cow and calf , a single cow and 2 small bulls grazing among the aspens. With our eyes as big as saucers and breath we didn’t know we were holding we crept closer and closer.  I snaked the range finder off my neck and slowly passed it to Shaun as I stared on in amazement at the biggest game animals I’d ever seen in the wild.  The closest elk, a smaller bull, stood at 62.5 yards quartered away in the “v” of two aspens with gnarly bushes in between.  As my husband began to draw back his bow I softly whispered “do you want to try to get a little closer and get a cleaner shot?”   He let it down concerned because it really was a trashy shot. As we began to creep closer we took exactly 4 steps when out of NO WHERE a doe mule deer jumped up just to the left of us and ran into the group of elk screaming in her language “RUN RUN THERE’S HUNTERS UP HERE!!!” and off they went!  As we followed them over the ridge we ran into another hunting party who were all on mules and in pursuit of the elk they had just seen run over the ridge.. On foot there was no way we could compete with them so we decided to hike over to the other peak and see if we could pick up another group of elk.

As we hiked around the rest of the day stopping for breaks and snacks and sometimes just to gawk and the sheer splendor of the country we were exploring our souls just hummed with praise for God and His ability to create.  It was getting late though by this time and we headed back for the valley and over to the adjacent mountain with the trail to lead us down.  I literally collapsed in camp when we finally returned so grateful to smell that my bestie was fixing dumplings! It had been a 15 mile day through some rough terrain and most of it had been at a huge incline with a 30lb pack. It was more than I’d ever pushed myself before and I was tired but feeling a HUGE sense of accomplishment.  Just seeing elk on a DIY was a success in mine and Shaun’s eyes!

The next morning we rested and spent time with the kiddos and that evening we decided to go back up and give it one more shot.  We packed up sleeping bags and food and a little two-man tent and decided to camp the night out there just the two of us at 8900 feet in bear country. How exhilarating! No marriage retreat on the face of this earth could facilitate the kind of bonding experience we had on the hunt.  We didn’t see any more elk but saw at least 40 mule deer which we had no tags for and were also not speaking to due to the previous ruined elk harvest because of one of their kind!  Waking up that high in the sky that morning the pink of the horizon as the sun began to wake and rise over the peaks to begin burning off the clouds that had nestled themselves among the tops of the aspens we knew this was not just going to be a one time trip.  This was a hunt, an adventure that had caused us to leave a piece of ourselves there and embrace a new one that would summon us back year after year.  I actually did leave a piece of my leg on a barbed wire fence up there but that’s not what I’m talking about!  If you’ve never experienced this before and you are given the opportunity you should seriously hit the door running!  This adventure changed our whole family’s lives.  We learned so much about ourselves and what we were capable of. We learned just how much we enjoy the outdoors and how we have instilled that in our kids so much so that they were totally in agreement of turning off the satellite and redirecting the money we were spending on television to a hunting trip fund so we can continue to experience the splendor of God’s country.  For us it’s not just about the harvest its about the experience!

Tuscarora Archers to Host "I SHOOT FOR THE GIRLS" Tournament