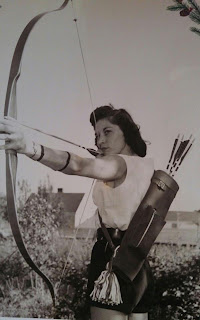 Eva Mazzella was born in 1933 and will be 80 years young this year. All of the people who know her lovingly call her the “Loudest Woman in Archery”.  If you knew her, you would know how she got that nickname! When Eva was a young child she was definitely a tomboy. She enjoyed doing things with her father, and he treated her like one of his sons. She loved to go fishing and spending time outdoors doing what most tomboys do. At the age of 18 Eva enjoyed the art of knife throwing, one day she saw a man out in a field shooting a bow. She thought how fun it would be to throw an arrow at a target instead of a knife, so Eva went and bought her first bow, a Damon Howatt Bow. From that day forward an archer was born. Eva was a pioneer for women in the sport. In the Fifties, Eva ran an archery shop out of her house. 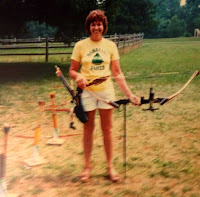 In her shop, The Arrow Shop, Eva sold bows and handmade arrows. One day a costumer told her “Women do not belong in the woods”. Eva, being a strong willed Jersey girl, had to prove him wrong. He took her rabbit hunting and from that day forth a bow hunter was born. In the late Fifties she started competing in archery tournaments and in 1959 won the Woman’s Bowman Class in the NJ State Field Archers Championship. She spent most of the Sixties and Seventies balancing hunting, competing and raising her children. In the Seventies Eva bought her first compound bow, a Jennings Bow, and went on a few hunting adventures from Whitetails in New Jersey to Elk in Colorado.
In the mid Seventies Eva joined Garden State Archers, where she befriended another female archer and was so happy to find another woman who loved archery. Eva found her second home. In the Seventies and Eighties, besides competing, Eva also taught camp kids archery in her free time. Eva still traveled the country competing in archery tournaments and spent time outdoors hunting in the Eighties until today, even winning the National Championship in the senior division. 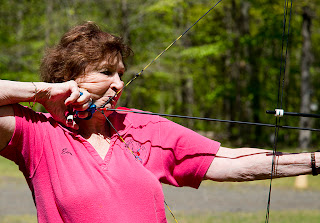 One thing Eva really wanted people to know is competing is not just about winning. She was not always the best shot, but she had such a passion for the sport that she knew winning wasn’t what archery was all about. Eva says her best memories are the camaraderie between her fellow archers and the times they spent together, on and off the course. I joined Garden State Archers in 2008 and that is where I met and befriended this wonderful woman. I share the same passion for archery and the outdoors as Eva does. My young daughter and I still shoot with her, we love spending time with her. We talk about everything from politics to hunting. I am hoping to be able to go hunting this year with Eva and my daughter. Eva has had some tragic losses and gone through hard times in the past few years. Through everything archery and her archery friends have been there and will always be there for her. She is a legend in the New Jersey archery world, and many of the state’s top archers owe a debt of gratitude to her. I would love to be an inspiration to someone as much as Eva is an inspiration to me and to others; and hopefully be able to introduce more women in the great sport of archery and hunting. When I asked Eva if I could share her story she told me she would love it if I did, she wants to promote archery and hunting to women.

I Shoot For The Girls Archery Tournament Raises Money for NBCF!