We asked Stacy Mitchum a few fun questions. Leadership Staff Spotlight is designed to help you get to know our awesome team of Leadership Staff a little better. Stacy lives in Arkansas and is and an avid competitive archer. 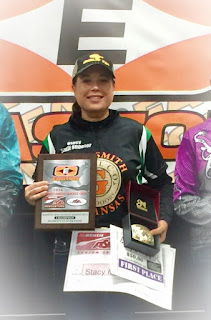 Are you a competitive shooter?

What types of matches / shoots  do you participate in?

I compete in 3D archery tournaments from January – August

What types of firearms / archery do you shoot competitively?

I shoot a compound bow in the Women’s Hunter Elite class.

If you could only shoot one type of competition what would it be?

I would shoot 3D competitions on the Archery Shooters Association (ASA) Pro/Am Tour.

How did you get involved with competitive shooting?

It was actually an accident. I had just begun bow hunting and some friends told me 3D archery would help make me a better hunter. One shoot and I was hooked! It’s quite addictive.

How long have you been shooting competitively?

I truly believe archery is a sport one can NEVER master.  My biggest problem is controlling that space between my ears. I tend to think too much.

See last question… Conquering the mental part of the game!

What would be the most amazing competitive stage that is still on your bucket list?

I would love to compete in the Western Classic Trail Shoot in Redding, CA!

Do not take competition so seriously! I am not a professional with $10,000 riding on one arrow. My life is not going to change based on my placement in a tournament. I’ve learned to just enjoy the friendships and memories I am creating with every tournament, and to appreciate the strong, awesome women that I would never have met without this awesome sport.

What do you like most about the SLG shooting trailer?

It’s an awesome place for women to try out bows and firearms with absolutely no pressure from salesmen or significant others. It’s a place to get help from women who understand that sometimes things are just different for girls!

If you didn’t have to sleep, what would you do with the extra time?

Spend time with my grandchildren- being a Grammy is the best thing ever!

What hobby would you get into if time and money weren’t an issue?

What non-shooting related skill would you like to master?

What’s the farthest you’ve ever been from home?

Where do you usually go when you when you have time off?

Who inspires you to be better?

My one year old granddaughters, Kinsley and Brayleigh, who were born on the same day just six hours apart.

If you could only eat one meal for the rest of your life, what would it be?

*Saying seen instead of saw- I think it’s a southern thing!

I know that’s a little picky, but I’m a 3rd grade teacher so…

Which of the five senses would you say is your strongest?

In a perfect world…skiing down a mountain to get to the beach! 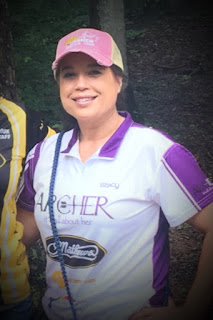