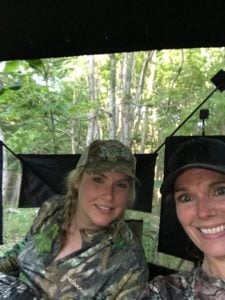 I recently took Shoot Like A Girl’s marketing director, Jeanine Sayre, on her first turkey hunt as the hunter.  The year before, I took her with me to the turkey blind when I was hunting. I was lucky enough to call a hen into our set up. I think from that moment she was hooked on wanting to turkey hunt.  I spent the entire next year, planning and putting pressure on myself to deliver the best turkey hunting experience for her.

I had a plan.  We would put out corn and bird seed blocks from Sportsman’s Choice Record Rack Feed, we would bush hog the food plots ahead of season, set the blind early, have the cabin cleaned and ready for company, and on opening day Jeanine and I would be out at sunrise and get Jeanine her first turkey.  This was a fool proof plan, until life got in the way.

This spring, it rained in Tennessee enough for us to start thinking about building an ark.  Our hunting property is back off a dirt road and you must cross a ford (a small stream crossing).  The small ford turned into a big one, and the John Deere tractor would certainly sink in the overly saturated ground.  So, unfortunately, no bush hogging was done.  Turkey’s don’t typically like to walk around in the tall grass; so, Strike One to my plan.

Strike Two was also completely unavoidable.  I suffered a small, but debilitating injury to my hand.  I tore my sagittal band.  It left my hand pretty much useless all of turkey season.  I tried to become the one-handed turkey bandit.  The injury prevented me from cleaning up our cabin and setting the blind early.  The only thing I was able to do was get some food out prior to season starting.  The injury also took up a ton of my time with appointments and physical therapy.  I was devastated that the hunting experience I wanted to give Jeanine was not coming together as planned.

Not one to take defeat, I took Jeanine with me to the property, and told her, “You’re going to have to learn to do this and help me, because I physically can’t do it alone”  She was an amazing help.  We were already two weeks into turkey season, and I took some shortcuts because of my injury.  I decided to set the blind up in an area that typically has turkey, but probably wasn’t the best spot due to its low elevation.   I had watched a nice Tom strut there that morning – and oh how I wished we had been hunting then.  We were just there that day to set the blind up, but since we had seen and heard so many turkeys, we decided to sit in the blind a while.  I was able to use a slate call, and low and behold, GOBBLES!  However, I just could not pull them to us.  I hid my disappointment from Jeanine.  I had such high hopes that this would be a quick successful hunt. 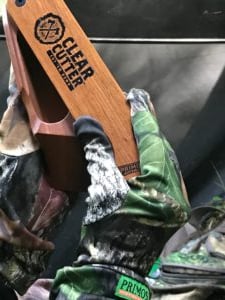 The day of our actual planned hunt, I woke up so excited.  I had nervous energy like I hadn’t experienced.  I had spent lots of time with Jeanine prior to the hunt, talking about what to wear, what to expect and what her fears were.  She was afraid of catching a tick born disease.  We put a lot of effort into preparation to mitigate this fear by spraying our clothes with permethrin; and using deet the day of the hunt.  Because of scheduling conflicts, we went out in the hot spring late afternoon.  As we were putting our gear into the blind, I noticed a wasp, then two, then I whisper yelled, “get out of the blind, get out of the blind”.  Jeanine jumped out.  When we set the blind up, I forgot to make sure all the windows were closed up tight, and wouldn’t you know, a hornet’s nest was in there.  I walked back to the cabin, got wasp spray and remedied that situation.  I felt so bad. I couldn’t believe that I made such a mistake.    She’s a self-proclaimed girly girl, and I didn’t want her to have to deal with anything unpleasant.  I was putting huge pressure on myself for this experience to be perfect for her.  We finally got set up in the blind.  After a bit of time, I called.  Once again, GOBBLES! We saw the Toms in the neighbor’s field.  They had hens, and they were…let’s just say busy making babies.  I could not get them to leave the real thing for our decoys.  I hid my frustration from Jeanine.

That night we stayed at our cabin. This cabin is completely off grid, but we have a generator, and a composting toilette. It has comforts of home, unless of course, you forget to bring gas for the generator.  Yes, I did that, too.  We spent the night with kerosene lanterns and grilled food.  I was really regretting that I couldn’t have been more prepared for this experience.

The next morning, we were up before sunrise to get to our blind.  No hornets this time, that was a plus.  I tell people all of the time, when taking someone hunting for the first time, make sure they are comfortable and warm.  If their feet, hands and head are warm; they have a good chance of enjoying the experience.  It had been 80 degrees the day before, and although we had talked about colder mornings, Jeanine looked at the temp, I think it was like 68 already, and thought it would be warm outside.  I didn’t double check with her that she had warm socks.  I had warm socks, because I knew walking to the blind, my feet would get wet in the morning dew.  She as a new hunter, did not know this, and I failed to make sure she had warm socks on.  I again hid my disappointment in myself, when she said, “my feet are cold.”

As soon as the sun came up, I called, and you guessed it, GOBBLES!  These birds were not coming to the blind. We had a hen poke around for quite a while, and literally was brushing her feathers on the blind.  We were in a Primos Surround Double Bull Blind, and it was awesome to watch her.

I mentioned I set the blind up in not the best spot, well, let’s multiply that by two.  I also set the blind up, 15 feet from a wood pile.  You know what’s in wood piles, snakes.  Jeanine heard them first.  In the silence of a hunt, when a snake slithers through the grass in front of your blind, it might as well be a freight train.  There was a 3 feet long black snake looking straight at us.  I stomped on the ground and it slithered back to the wood pile, where his buddies had their heads poking up.  Once again, I was disappointed in myself for not making this experience pleasant for Jeanine.

I had such high expectations for this hunt.  I wanted it to be the perfect for her.  Even though personally, I enjoyed the experience of being out and hunting; it was overshadowed with feeling  like I had failed to provide Jeanine with the best experience.  It wasn’t until I read Jeanine’s blog about her hunt, that realized, she really enjoyed herself, too.

I had taken Jeanine coyote hunting once before.  We set up on a ridge overlooking some dog paths with beautiful scenery.  I will never forget her shear excitement and the statement she made.  She said, “Karen, if doctors could prescribe this (sitting in the nature), there would be no one on anti-depressants.”  Her blog titled, Reverence, really describes the emotion that comes from hunting.  The emotion she felt while we were on her turkey hunt.  The fact that as a new hunter, she understood the hunt is far less about harvesting an animal, and more about the experience means I did a good job of introducing her to hunting.  All that pressure I put on myself was undue.

Getting the Most Out of Your Hunting License

Safety in the Outdoors by Karen Butler