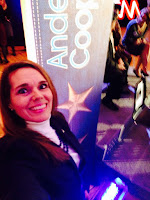 I was very excited when I was invited by CNN to be an audience member on their program, “Guns in America – The President’s Town Hall” hosted by Anderson Cooper.  I did not know what to expect, but I was eager to have the opportunity to talk about safe responsible gun ownership and give a voice for those of us who value the 2d Amendment.  I went into this event a bit naïve of the Washington DC politics, and came out with several observations about the process and the people that we all need to take seriously.  During the Town Hall the president mocked people who think there is a conspiracy theory to take all our guns, but there are hints of it everywhere from the protesters, to the politics, the setting, and to the untruths.  The good news is that the level of encouragement and support I had from friends and strangers alike strengthens my will to advocate for safe, responsible gun ownership.

The Protesters.  I have to say, I just don’t get it.  These people were gathered and holding their “No Guns” and “No terrorist” with a picture of gun signs, and little children’s t-shirts hung on a line to represent children who were killed.  That would seem like a somber moment to me, but these people were clapping, and cheering for the President’s executive order, saying “Thank you”.  They were, well, having a huge party.  I’m certain, they think this order is one step closer to the complete disarming of America.  Click here to see the video  of their celebration.
The Politics.  Even though I disagree with the viewpoint of the President, I was excited for the opportunity to not only see, but talk to the President of the United States.  Unfortunately, this excitement turned to disappointment only two minutes into his speech.  He wasn’t giving a speech you say, actually he was.  It didn’t matter what the questions were, he had his talking points and in my opinion, this wasn’t about hearing from both sides, this was about driving home the point that he does not think much of guns and gun owners.  His utter contempt for the NRA, which I am a proud life member of, was apparent.  I would say I was offended, but that is really the other side’s shtick, I was just extremely irritated.
The Setting.  CNN claimed that the audience was 50/50 with pro and anti gun supporters.  Not true.  The questions may have been 50/50, which was nice; however, the audience was more like 10/90.  I believe there were about six pro 2d Amendment people there. The rest of the audience was made up of extremely biased, anti-gun fanatics.  I tried to have rational discussions, but these were unreasonable people.  This scene was set that way, purposefully.
The Untruths.  I was amazed at how bad the data was that was used to make points.  The surveys that were used to support the opposing position were from 1999, and extreme anti-gun groups collected the data.  The worst to me though, was when Kim Corbin’s question was addressed, and the President condescendingly inferred that women who use guns to protect themselves are too stupid to get training and will have the gun turned on them and/or their children will be killed because the gun is in the home.  Talk about a war on women, this was just ridiculous.
All of these factors made me realize just how organized people who oppose the 2d Amendment are, and how we had better be prepared to come together and stand up for our rights.  I am confident we can, because as I started this journey, strangers and friends embraced me.  One of my favorite moments was from the ticket agent at the airport counter, when I told her I was headed to the Town Hall to advocate for gun rights, and she gave me a huge hug, and screamed, “Go get ‘em!”  This random act of support gives me faith that together we will persevere.

Instructor Corner: Hold What You've Got!