It was a beautiful day,  Darryl, my husband and I had just finished eating a late lunch.  As we left the restaurant to walk to the car, a man caught our attention.

Managing unknown contacts is something I train, plan and practice for.  Recently, I had to implement the plan. Darryl and I had finished shopping at a police supply store in a big city, downtown area.   There is a heavy transient population near that store; so we had chosen to eat at a restaurant, some distance from it.

We left the restaurant at 3:00 in the afternoon. It was a beautiful Saturday. As we walked towards our car, a dude in his late 20’s something, wearing sagging grey pants, a grey hoodie and carrying a grey and white backpack was two steps ahead of us in the restaurant parking lot.

He was looking in the ash trays along the wall for unfinished cigarette butts, and he immediately ticked both of our radars.

We glanced at each other and slowed down a step and gave him a little space to move on. Darryl handed me the to-go box without a word, both of us knowing why. He needed his hands free. The man turned left around the corner of the restaurant building as we cut right across the parking lot to the truck.

In an instant, he came up behind us as we neared the truck passenger door. 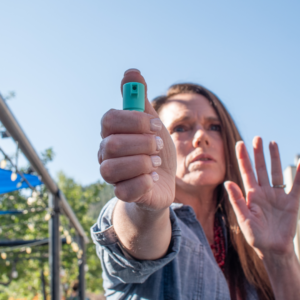 Darryl put himself between me and the dude, and put his pepper spray in left hand… right hand at the ready. Darryl shook the pepper spray canister to make it obvious he was ready if the guy decided to attack us.  The dude looked at Darryl’s hand with the pepper spray and called him a “pussy”.  Luckily, he walked on about 10 steps, but then turned back to assess if “maybe” it would be worth the fight. Darryl postured up and said  “I’ll f#@$-you up.”

Darryl’s appearance is not usually taken as that of an easy target, plus there were two of us.  This dude was a hungry predator.  After he decided to walk away, he jay-walked across the street and began working each parking lot, looking for another target of opportunity.

I reflected on the training classes I have taken from Tom Givens, Chuck Haggard and Cecil Burch. I was grateful for Darryl, and grateful for the spot-on training I had received from each of these 3 excellent instructors. The incident had played out almost to the letter, just like the lessons they had taught in class.

Above all, the moral of the story: Always be ready and alert, especially when you are at those watering holes… even in broad daylight. 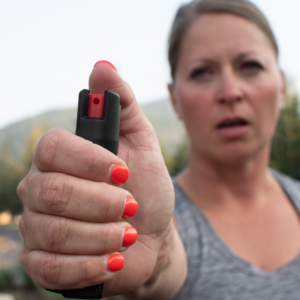 I was really proud of how Darryl and I responded together, as a couple to this encounter.  He and I talk through plans frequently (especially after training classes) and about different situations.   You need to be prepared.  All things considered, carrying Pepper Spray in addition to a firearm provides something between a harsh word and a gun. It can happen to anyone, including  you.  Most importantly, invest in good training, have a plan and practice!

Note:  Any links clicked in this article may result in a commission to SLG2, Inc.