There are some tough decisions made in the field – like harvesting a bearded hen. It’s Legal, but is it Ethical?

I am a self-taught hunter.

My family didn’t hunt or participate in shooting sports.  I was single and in my early 30’s when I first started thinking about hunting.  After I married Todd, he was gone so much with the Marine Corps, that I just had to figure it out for myself.  When I say, “self-taught” I mean “taught by many people” who were, and still are, willing to share their knowledge about hunting when you ask them to.  I am continually watching Primos Videos, reading Outdoor Life and Field and Stream Articles, and watching hunting tv shows.  I learned a lot from hunters’ education and my first hunt with my buddy David, who was nine (or so) at the time and the son of an archery friend.   Guided hunts also provided learning opportunities; you can read more about that in this article at American Hunter.  There is so much information out there, that you really can teach yourself to hunt, even if you don’t come from a family of hunters.

What isn’t clear are the ethics of hunting.  It’s legal, but is it ethical?

The hunting regulations teach the legal requirements and limits.  It is amazing how they vary state to state.  What isn’t clear are the ethics of hunting, the things you only learn from hearing hunting stories and opinions of other hunters, or when you are in the field faced with a decision.  I recently found myself in that exact situation; and did what any practical person would do…I PHONED A FRIEND.

Here was my dilemma.  I had been mentoring turkey hunts in Kansas, and had the opportunity to drive to Unit 2 to fill a tag, but only had a few hours to hunt.  Not great odds.  I had a fantastic guide with me, and we got to a spot, set up, called and “GOBBLE”!  Now, that was exciting since it was the second to last week of the season. 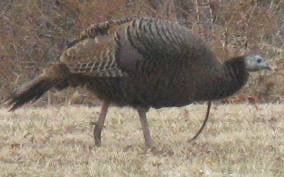 After an hour or so, in walked some hens.  One of the hens had a beard long enough to make any tom jealous.  The guide softly said, “the bearded hen is a trophy, and she is legal.”  Earlier in the year, I had passed on a bearded hen on our own property in Tennessee because I wanted her to have babies.  So, I said, “Thanks, I’ll wait for the tom to come in.” With all those hens around, surely one would be around soon.

However, after over an hour, there were no toms, and the hens had gathered up, and the bearded hen was still there.  She was looking like an option to have a successful hunt, and get our guide to where he could pick up his other hunters, who had called, ready to go in.  However, something in my gut told me it wasn’t the right thing for me to do; not that it wasn’t legal, or right for someone else’s choice, but right for me.

I wanted someone to tell me, harvesting a bearded hen was ok; someone to tell me it would be right.  I started texting with several friends, with one bar of service…you know what that’s like…slow!  Luckily for me, Rob Keck, the great Rob Keck with his years of experience and all his efforts in conservation answered me back.

Me:  What are the pros cons for taking a bearded hen? I’ve had one in front of me for an hour.

Rob:  That’s a matter of personal choice.  With turkey populations down in numbers we need all the hens laying eggs as possible.  Only you can decide!  It is a personal decision.

Me:  Well then it is an easy decision – nope not gonna do it. Thank you for being my phone a friend.

I decided to pass on harvesting a bearded hen.  She was left to live and have poults (baby turkeys).  We pulled up and I left my tag unfilled.  I didn’t regret not pulling the trigger; however, I might have regretted it if I had pulled it  – you can’t take that back.  Rob later sent me clippings from an article stating that passing on a bearded hen will make a difference to the turkey population.  I felt even better about my decision.  I honestly think that is why there isn’t a lot of information on the ethics of hunting.  When it comes down to it, that decision is made in the field, by the hunter.  Like Rob wrote in his text, it is a “personal choice”.